Non La â€“ A Symbol of Vietnamese Charm and Romance

When traveling throughout Vietnam, tourists never fail to take notice of the local charming ladies donned in "Áo Dài"(Vietnamese traditional long dress) and Non La (conical leaf hat, Vietnamese: Nón Lá) walking gracefully along the streets. By no doubt, the Ao dai embody the femininity and charm of the Vietnamese women, while the appeal and functionality of the Nón Lá create a beautiful harmony of the entire ensemble, leaving a strong impression of gracefulness and romance to any tourist who visits the country.

The legend of the conical hat is related to maternal love and the history of rice growing in Vietnam. 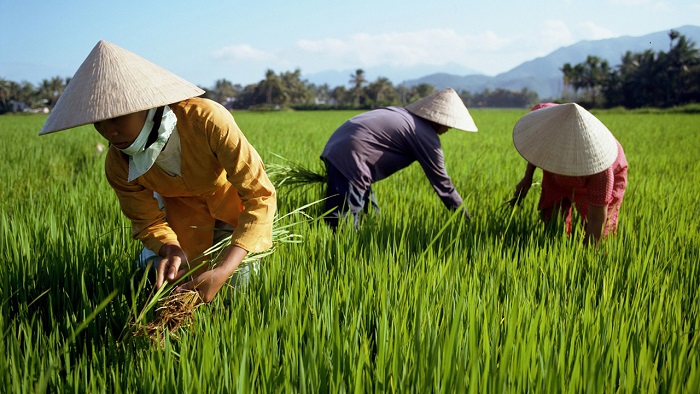 Non La – A Symbol of Vietnamese Charm and Romance
Once upon a time, the legend says, when a deluge of rain was falling there descended from the sky a giant woman wearing on her head four huge round leaves as large as the sky itself and stitched together by bamboo sticks. The leaves protected humankind, then still naked, from the rain. The giant messenger from the sky twirled round the leaves on her head to dispel clouds and rains. Those who followed her were taught by her how to grow crops. One day mankind dozed off as they listened to stories narrated by her. When they woke up the goddess was gone. The Vietnamese built a temple in her memory and honored her as the Rain-shielding Goddess. Following her example, people went into the forests to fetch broad and round leaves (palm) which they stitched together on a bamboo frame. This was to become an indispensable headwear for the farmers on the fields, boat-women carrying passengers across rivers, travelers under the blazing sun…
However, Vietnamese girls do not like just any conical hat they come upon. The dearest to them is inevitably the one called the “Poetical Leaf “for they become milder, more elegant and more delicate when once they put on a hat, which gives shelter to their blushing cheeks like a crowing bud protected from sun, rain or rough wind. Vietnamese women also use the conical hat to fan off the heat of summer, as a container for a bunch of vegetables, and even as a bowl to relieve the thirst when passing by a well, etc. Romantically, young couples can veil their kisses behind this traditional conical hat during their dates.

The shape as well as the size of the conical hat has evolved greatly. As a rule, the broad-rimmed hat was reserved for women while men wore hats with a higher cone and smaller rims. Then, there were hats made specifically for wealthy and powerful people, hats for children, hats to equip the army, hats for the Buddhist clergy, for the mourners…, more than 50 types in all. Undoubtedly, the two best known and best liked are the conical hat of Chuong village in Ha Tay province, north of Hanoi, and the “Bai Tho”, hat of Hue, the old imperial city.
The prototype of Lang Chuong hat is a large disk-like bamboo frame covered with palm leaves and perpendicularly bent on its rim to form a band of about four inches. At the center is placed a small bamboo frame to fit the head. The strap is usually very elaborately made of silk, adorned with yellow tassels also made of silk. This hat used to be worn by upper-crust families during visits to pagodas or festive occasions. 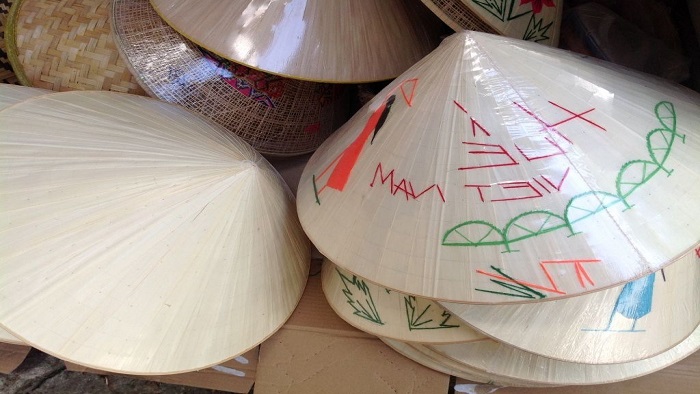 Non La – A Symbol of Vietnamese Charm and Romance
The present conical hat is, however, patterned on the “Bai Tho” hat originating in the old capital city of Hue and the birthplace of many eminent literary men. It is true that the place where the hat comes from has been romantically famous with its peaceful Huong (Perfume) River and its majestic Ngu Binh (Peace) mountain. Moreover, Hue has been famous for her attractively sentimental, soft-voiced and long-haired girls who often gave inspiration to poets whose creative works have been handed down to the present day. And the “Poetical Leaf” has a prominent place in all that poetical, dreamy and yet scholarly diet of the ancient city. It is so called because the artisan takes great pains to cut the characters of a verse out of a palm leaf and insert them between two layers of palm leaves before stitching them together. The characters will be easily readable when the hat is seen against sunlight. Nowadays the characters are usually replaced by a decorative figure such as a flower, a dragon or even a landscape.

How to make a conical leaf hat

The making of a conical hat is a one-hundred-percent handicraft. The leaves used to cover the hat are brought from the forest. Then they are exposed to the dew for one night to soften them. When the leaves become dry but still soft they are flattened either by hand or by ironing. Only young leaves are selected. Old or dark ones are discarded. A hat usually consists of 16 to 18 rims made from a special kind of bamboo. In order to have a well-made hat, it must be knitted together with a peculiar kind of thread called “doac” made from the leaves of a special kind of reed. Finally, the hat is trimmed and painted with a coat of attar oil to keep it clean and smooth.
The skill of the craftsman (who in this case is more likely a woman) can be judged by the regularity of the leaves arranged on the hat. The roundness of the rim and particularly the fineness of the stitches which must be so done as to reveal no knot.
Although the conical hat is no longer the cities woman’s everyday costume, it remains the ubiquitous head wear in the countryside. And a young girl with her conical hat, quite charming in her four-flapped long dress, is always a popular image of Vietnam and the Vietnamese people.